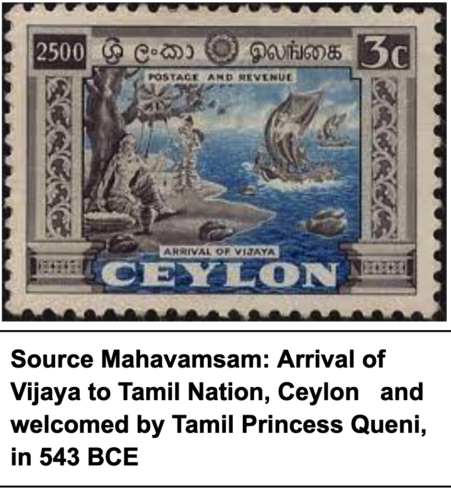 “Sri Lanka will never reach a political solution or to create a constitutional amendment regarding a peaceful political resolution that would benefit Tamils.”

“The Tamil Empire existed before Prince Vijaya came to Thambapanni. After arriving in Ceylon from India in 543 BCE, Vijaya married Queni, a local Dravidian Tamil princess from Thamapani.”— G. Rajkumar

NEW YORK, NEW YORK, UNITED STATES, November 22, 2022 /EINPresswire.com/ — The Secretary of the Association of Disappeared Tamils, Gobalakrishnan Rajkumar, has requested Tamil political leaders in Sri Lanka should call for a referendum under the supervision of the UN to choose either Ranil’s political solution for the Tamil crisis or Tamil sovereignty.

The public protest by missing relatives has reached 2,100 days, including a vigil held this past Saturday, November 19, 2022.

Rajkumar said this while addressing the media after the protest:

Today is the 2100th day of our continuous struggle to find our missing Tamil children and to reclaim Tamil sovereignty in order to save our people from future genocide. In this, we have continuously asked for help from the US and EU.

The Tamil Empire existed before Prince Vijaya came to Thambapanni. After arriving in Ceylon from India in 543 BCE, Vijaya married Queni, a local Dravidian Tamil princess from Thamapani. Even the Mahavamsam created by the Sinhalese acknowledges that the owners of the island were Tamil Dravidians. This shows that Tamils had their own sovereignty in Sri Lanka before Vijaya’s arrival.

This alone is enough to request the US and the European Union to help restore the sovereignty of Tamils in our North-East.

A safe and secured Tamil homeland is the only way to protect Tamils. We need our sovereignty restored.

If we go to the International Court of Justice of the United Nations, we can advocate for our sovereignty to be officially recognized. But our Tamil leaders are not intelligent. From 1945 to today, Tamil leaders have mostly have been from the Colombo Tamil community.

The goal of these Tamil leaders was to become successful lawyers and politicians in the North-East with fluent English. They don’t want to lose their investments, friends, and property in Colombo. They want to keep close contact with the Sinhalese authorities.

Here’s how Sinhalese politicians have obstructed the implementation of the 13th Amendment:

The above reasons show that Sri Lanka never actually planned to reach a political solution or to create a constitutional amendment regarding a peaceful political resolution that would actually benefit Tamils.

Even if the stronger countries force Colombo to consent to federalism, we can expect the same outcome with federalism as what happened to the 13th Amendment.

Even if there is federalism, Colombo will not support this financially or conduct federal elections, nor will the government allow the Tamils to implement federal law and order. The Sinhalese would immediately try to remove a federalist system through a 2/3 majority.

Therefore, we request the so-called Tamil political leaders to petition the US and EU to hold a referendum under the supervision of the UN, where Tamils can decide between Ranil’s political “solution” on the one hand and Tamil sovereignty on the other.

We know that there is tremendous pressure on Sri Lanka from some powerful countries to hold a referendum. This is the reason why Ranil is now trying to talk to Tamil politicians and a strange pro-Sumanthiran diaspora Tamil Congress in Canada is calling on the Sinhalese Justice Minister not to talk about the North-East and to force the Tamils and Sinhalese to protect the Sri Lankan Buddhist identity.

The Tamilian Struggle For Justice In Sri Lanka: Acknowledging The Tamil Genocide
https://www.humanrightspulse.com/mastercontentblog/the-tamilian-struggle-for-justice-in-sri-lanka-acknowledging-the-tamil-genocide

When Hindu temples are destroyed in Sri Lanka, why are Modi and the BJP silent?

October 6, 2022 Tamil Diaspora News.com முக்கியமானவை Comments Off on When Hindu temples are destroyed in Sri Lanka, why are Modi and the BJP silent?

When Hindu temples are destroyed in Sri Lanka, why are [மேலும்]

Tamils ​​should decide the fate of Tamils: Thavathiru Velan Swamy

In the discussion held October 10,2022 in Jaffna, Thavathiru Velan [மேலும்]