The 13th Amendment historically has never provided any protection to the Tamils.

The international community will facilitate a political solution in Sri Lanka only once; instead of the 13th Amendment, we should convince the world for a solution that is non-revocable, of a secure and defended Tamil homeland.

The following statement made by Mr. G. Rajkumar on 1767th day of struggle of the mothers of missing Tamil children on December 19, 2021.

Today is the 1767th day of our struggle and calling for the United States, the European Union and India to find our children, by the Association for the Disappeared Tamils. 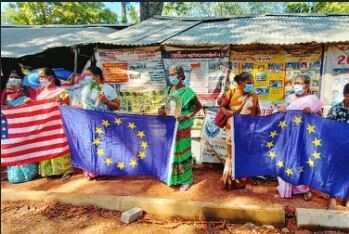 After having been a unitary state, the Tamils lost many rights and did not gain a single political benefit from the amendment.

Following the war and continuation aggression, oppression, and genocide by the Sinhalese, the Tamils need three basic frameworks for their survival as a race in the northeast.

Tamils need protection from killings and abduction, from the abuses committed under Sri Lanka’s terrorism law, and the land grabbing. We need to save our younger generation from drugs and the gang violence that have been supported by Sri Lankan intelligence services. Our culture and language are under serious threat and need to be preserved.

Tamils need a secure homeland; the northeast needs be protected from the Sinhalese coming in with the brutal Sri Lankan army to take our land in the name of false or manipulated history. They are the true terrorists.

Tamils need a non-revocable political solution that cannot be taken away by the Sinhalese government. We have seen many of our political rights trampled upon by Sri Lanka.

For instance, in 1944, a constitutional safeguard was provided for the Tamils and Muslims by Article 29(2) of the Soulbury Constitution but was revoked by Srimavo Bandaranayake in the 1972 Sri Lankan constitution.

As per the so-called 13th Amendment, Sri Lanka refused a northeast merger and provincial police and land authorities. Many schools, hospitals, and more institutions were taken from the provincial authorities by the Colombo government. These all show that any constitutional arrangements can quickly be removed by the Sinhalese with ⅔ majority anytime and anywhere.

We Tamils recognize and assert that any political resolution must be independent of Colombo, so that our political rights cannot be allowed to be taken away.

The international community will facilitate a political solution in Sri Lanka only once; instead of the 13th Amendment, we should convince the world for a solution that is non-revocable, of a secure and defended Tamil homeland.

Why is Selvam Adiaikalanathan pushing the 13th Amendment with a meeting with all parties?

The 13th amendment was dead on arrival in 1987. India used the 13th Amendment to control Sri Lanka. India never actually thought of implementing it; this was all just talk.

We don’t trust the Mr. Selvam Adaikalanathan or his spokesman Suren Surenthiran. As we know, TELO carries water for India.

What did Selvam do when his friend Ranil’s government gave 5000 deeds to Sinhalese in Nedunkerny, Vavuniya? Adaikalanathan in his deputy speaker position never criticized Ranil’s government. He even voted for the budget to build 1000 Buddhist temples in the Tamil homeland by allocating millions of rupees.

We do not trust any TNA Member of Parliament. If an MP takes money from the enemy, please do not trust them. They are MPs only to take care of themselves.

India has never had any experience in political negotiation. We need the kind of negotiation that occurred with the Bosnian conflict, not the sham of the 13th Amendment.

We urge the United States to undertake political mediation with their experienced constitutional scholars. We hope all parties will come to the conclusion that only mutually agreeable solutions that accord with the Tamils’ wishes are tenable. In other words, we are asking for a referendum.