Tamils for Biden sent a letter to incoming US Ambassador Ms. Julie Jiyoon Chung to congratulate and ask her to share the important information about the suffering of the Tamil people in the 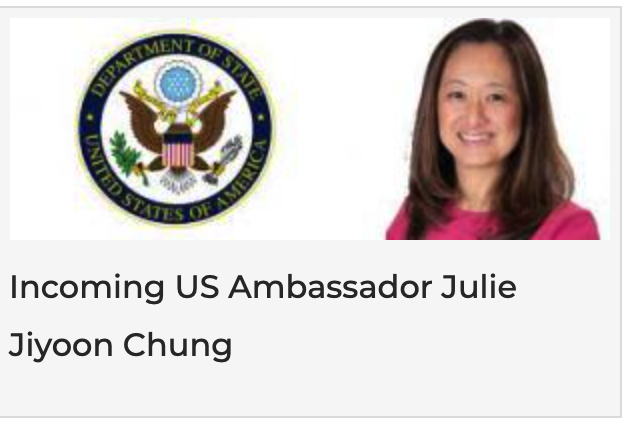 north-east Sri Lanka with her colleagues in Washington, D.C., and the administration.

Here is the letter that was sent by Tamils for Biden:

Re: Congratulations from the Tamils in US (Tamils for Biden)

We write this letter to congratulate you on your recent confirmation by the U.S. Senate as the U.S. Ambassador to Sri Lanka.

We as the Tamil diaspora are deeply concerned about the situation of the Tamils in the north-east Sri Lanka, especially the human rights violations committed by the Sri Lankan government.

To keep the sea lane safe in the Indian Ocean from Chinese aggression, it is important for there to be peace in Sri Lanka. Peace can be achieved by separating Tamils and Sinhalese and this will help the United States protect its economic and political interests in the region.

Since the Tamil Homeland represents a large part of the coast of Sri Lanka, the U.S. can benefit itself by supporting the Tamil’s quest for a secure and defended homeland through a non-revocable, permanent political solution.

We would like the Madame Ambassador to visit the north and east to view for herself how the Tamils are suffering from the genocidal war conducted by the Sinhalese against the Tamil people, and kindly urge you to talk to Tamils there.

In 2009, 146,000 Tamils were massacred by the Sri Lankan army overseen by the defense secretary at the time, Gotabaya Rajapaksa, who is now president of the country.

Tamils in Sri Lanka live in fear of kidnaping, killings, rapes, and oppression by the Sri Lankan army and other abuses of its authority; they also suffer continuous economic hardship because of the government’s discriminatory policies.

Tamils have been searching for a political solution since the independence from the British in 1948, every appeal has been ignored and no agreement ever became fruitful.

Tamils worldwide are currently asking the United States to act on our behalf to help forge a lasting political solution: a secure and protected autonomous state in the north-east Sri Lanka. The Tamils were an ancient people on this land. Now we are on the verge of losing our identity due to a continuing genocide overseen by war criminals posing as politicians.

We ask you to watch the video produced by UK Channel 4, titled Sri Lanka’s Killing Fields, which shows what ruthless killers the Sri Lankan government and its Armed forces are.

Here is the Link: https://www.youtube.com/watch?v=3aBLl_M3z40

It is also available on Vimeo as well as Channel 4’s website.

We hope you will share this important information about the suffering of the Tamil people with your colleagues in Washington, D.C., and the administration. Tamil women in particular have suffered from terrible poverty due to loss of their husbands and children and their land being taken by Sri Lankan army, a situation worsened by sexual assault from soldiers as what appears to be an army-wide policy of intimidation and control through sexual violence. There are 90,000 Tamil widows, along with 50,000 orphans and relatives of 146,000 Tamils who were killed in 2009, with over 25,000 Tamils still missing.

We wish you the best of luck during your tenure in Colombo and hope that every journey of yours to the Tamil homeland is productive. We welcome you and have faith that the United States will act against the injustice and atrocities occurring in Sri Lanka.