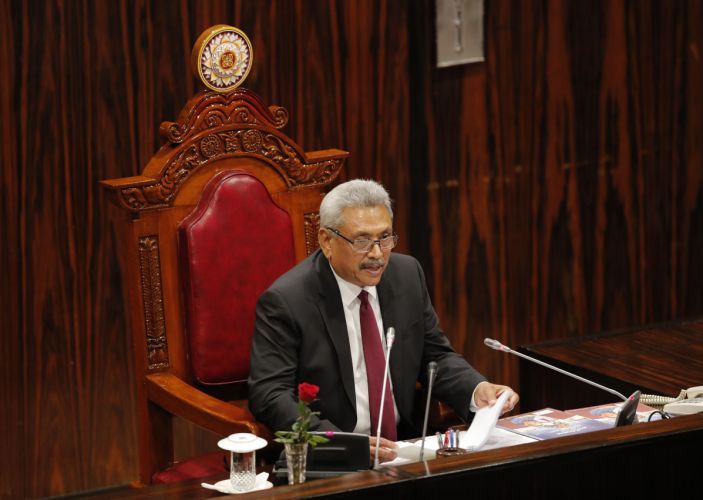 In a policy speech after he presided over the opening of a new Parliament session, President Gotabaya Rajapaksa said a majority of the voters who elected him in last November’s presidential election rejected “political agendas founded on race” and proved “it is no longer possible for anyone to manipulate and control the politics of this country by playing the role of kingmaker.

“Even though elections can be won through numbers, an unstable Parliament that cannot take clear decisions and remains constantly under the influence of extremism is not one that suits the country.”

Voting patterns during the election showed a clear divide between Sri Lanka’s majority Buddhist Sinhalese and minority Tamils and Muslims. A vast majority of Sinhalese voted for Rajapaksa, while minorities overwhelmingly voted for his main opponent, Sajith Premadasa.

Rajapaksa in his speech pledged to respect the aspirations of the majority by protecting the unity of the country and Buddhism while ensuring people had the right to practice the religion of their choice.

Sri Lanka has a proportional representative electoral system where parties with a smaller support base could also return lawmakers with a minimum vote percentage. Minority politicians say the system had given them reasonable representation and help stem any anti-minority move in Parliament, which has a permanent majority of Sinhala Buddhist lawmakers.

Sinhala nationalists say minority politicians hold the governments to ransom to promote their racial agendas, undermining the status of the Sinhalese.

Sri Lanka’s ethnic polarization led to a 26-year civil war between the government and Tamil rebels in which at least 100,000 people were killed, according to conservative United Nations’ estimates. Rajapaksa was a military officer during the war, which ended with the Tamils’ defeat in 2009.

Rajapaksa said in his speech that the constitution has many “ambiguities and confusions” and changes are needed to rectify them.

A 2015 amendment curbed presidential powers substantially and increased the powers of the prime minister and the Cabinet. It also set up independent commissions to appoint officials to the police, bureaucracy and the judiciary.

Rajapaksa said a strong presidency, Parliament and judiciary needs to be created through constitutional changes.

Rajapaksa can dissolve parliament after March and call for elections.