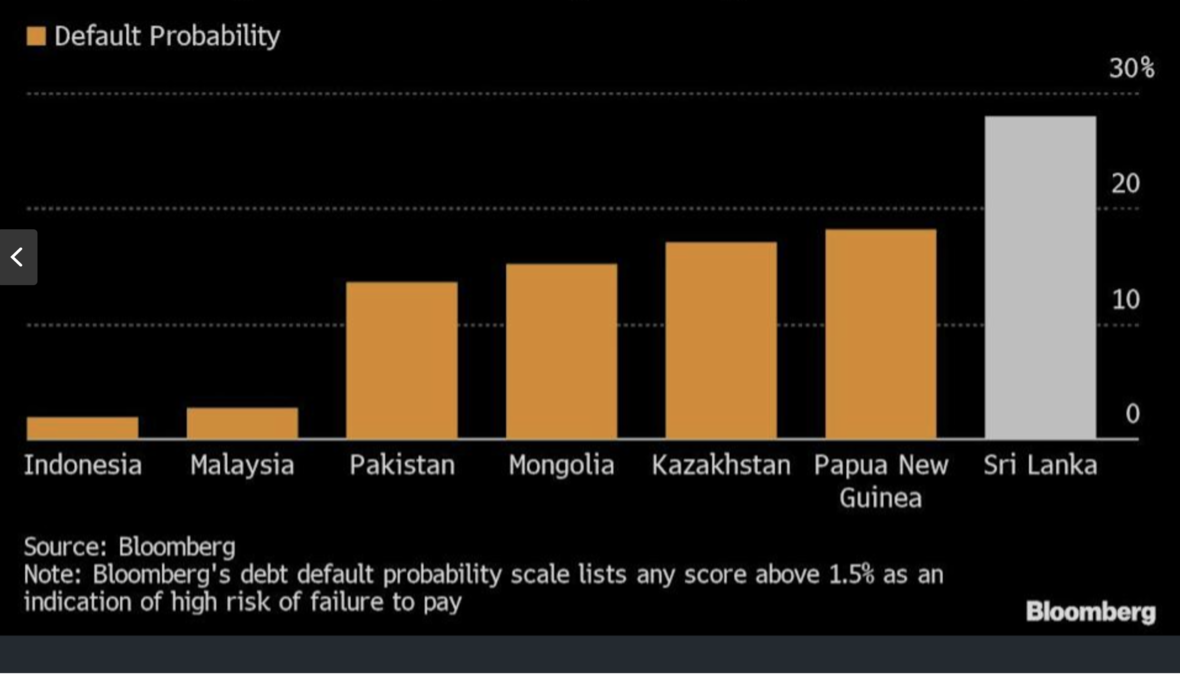 Asia’s Highest Default Risk Spotlights Sri Lanka Debt Worry
Anusha Ondaatjie and Lilian Karunungan
Tue, July 6, 2021, 4:10 AM
(Bloomberg) — Sri Lanka’s risk premium for a default jumped, reflecting concern that the pandemic is damaging the nation’s ability to fill its foreign-exchange coffers ahead of at least $2.5 billion in dollar debt due in the next 12 months.

The nation’s five-year credit default swaps rose to 1,553 basis points on Monday, the highest since March 1. A separate gauge of one-year default probability was at 27.9%, the steepest in Asia, up from around 13% over six months ago, according to a Bloomberg model where a reading above 1.5% signifies high risk of failure to pay.

The first test comes July 27, when the South Asian nation must repay a $1 billion bond to investors. President Gotabaya Rajapaksa’s administration tightened capital controls last week, limiting how much foreign currency can leave the country, and speculation is growing that it may need to turn to the International Monetary Fund for additional finances after securing assistance from countries including China.

“These resources should enable Sri Lanka to meet its remaining debt maturities through the rest of 2021,” said Sagarika Chandra, primary sovereign analyst for Sri Lanka at Fitch Ratings. “Nevertheless, Sri Lanka’s debt repayment challenges will continue into the medium-term. Authorities have not yet specified plans for meeting the country’s foreign-currency debt-servicing needs for 2022 and beyond.”

Arrangements are already in place to settle the bonds due later this month, the central bank said in a statement late Monday. Two more payments become due next year — a $500 million bond on Jan. 18, followed by $1 billion of debt maturing July 25.

“The other bonds also we will pay,” said Ajith Nivard Cabraal, Sri Lanka’s state minister for money and capital markets and a former central bank governor, citing steps such as foreign- exchange controls and swap agreements with China and Bangladesh.

Still, the uncertainty has prompted calls from some opposition party members for Sri Lanka to seek help from the IMF, which prematurely ended a $1.5 billion fund facility last year amid change in financing needs due to the pandemic. While the government and the central bank have said there’s no need to go back to the Washington-based organization, it isn’t uncommon for nations to renegotiate terms with the global lender of last resort.

Sri Lanka’s government is instead aiming to pursue its own policy mix, including promoting import substitution and garnering support from bilateral creditors including India and China. It secured a $1.5 billion currency swap line from Beijing in March, and is expecting inflows including a $250 million swap facility from Bangladesh’s monetary authority, besides a $400 million facility from the Reserve Bank of India to bolster reserves.

Foreign-exchange reserves stand at around $4 billion, excluding the China swap agreement, according to the central bank. That’s enough to cover three months of imports.

The sell-off may be overdone in short tenor debt, especially notes maturing 2023 and 2024, according to Ek Pon Tay, senior portfolio manager for emerging-market debt in Singapore at BNP Paribas Asset Management.

“The sovereign’s near-term liquidity is not a concern,” said Tay, who expects an IMF package to materialize in coming months and predicts Sri Lankan banks, which hold a third of the July 2021 bond, to plow that cash into other upcoming maturities. “In the medium term, however, a renewed risk is a widening trade deficit given rising oil prices.”

Investors are also expressing concern about Sri Lanka’s capital controls, which are seen as a way for the economy to shun reliance on foreign borrowing, and more importantly ward off interference from the IMF, whose aid comes with strict conditions.

The capital controls “risk the emergence of parallel exchange rates, disrupt access to imports and ultimately may well stall the economy,” said Tim Ash, a strategist at BlueBay Asset Management in London. “They might all just make the end game more painful, rather than actually resolving anything.”

(Updates with details on future payment dates in the fifth paragraph.)

Subscribe now to stay ahead with the most trusted business news source.