“The Colombo-base demonstrators should call for “Tamil Sovereignty,” as it will allow the Sinhalese to live freely without any conflict and suffering.” 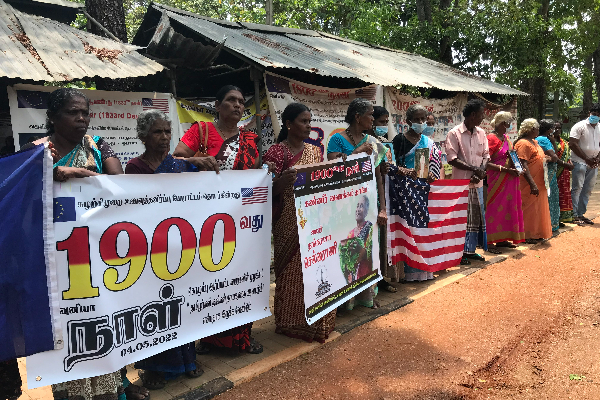 Our message to demonstrators in Colombo: To bring an end to your economic crisis, you should support Tamil sovereignty.

The Colombo-base demonstrators should call for “Tamil Sovereignty,” as it will allow the Sinhalese to live freely without any conflict and suffering.”— G. RajkumarNEW YORK, UNITED STATES, May 5, 2022 /EINPresswire.com/ — Message Sent to Colombo Demonstrators by Vavuniya mothers of Missing Children

Tamil moters of Missing Children’s message to demonstrators in Colombo: To bring an end to your economic crisis, you should support Tamil sovereignty.

Today is the 1900th day of our continuous struggle in asking help from the U.S., EU and India to find our missing children.

The slogan of the Colombo demonstrators should include “Let the Tamils rule their own homeland.”

By continuing to keep Tamil areas under Sinhalese control, the country is unstable. This has been happening since 1977, even before, and is something that nations like India and China and others in the international community desire. They want to Sinhalese-Tamil conflict to continue, as they use this as a pretext to try to control Sri Lanka, and Sinhalese politicians play into it.

Consider what Sinhalese politicians have done to the Tamils:

All these actions by Sinhalese politicians were done to attract Sinhalese voters.

Most of the Sinhalese believe in the Mahavamsa and its spurious mythological claims that the north-east should be Sinhala Buddhist land.

However, these beliefs and actions are making the daily life of the Sinhalese miserable, leading to endless conflict and now economic crisis. As long as Sinhalese insist on maintaining Tamil areas as part of Sri Lanka, the Sinhalese people and the government will suffer.

The crimes and carnage that the Sinhalease politicians committed against the Tamils are Karma, and now Karma has started to do its own work.

China has used the Sinhalese-Tamil conflict to their advantage. The Chinese gave weapons to the Sinhalese to kill the Tamils, and in return now the Chinese have taken the Ampanthoddai port and Colombo port. There are rumors that Sri Lanka has promised to give more lands to the Chinese. Before long China will effectively control the entire country.

India created the so-called 13th Amendment to supposedly help resolve the Sinhala-Tamil conflict, but it is in fact using the amendment to manipulate Sri Lanka. India is even talking about annexing Sri Lanka.

Other nations will never honestly seek to solve the Sinhala-Tamil conflict. Instead they use it to exploit the Sinhalese and Sri Lanka.

The Tamils have been suffering for a long time. For us, suffering is a daily part of life. But it is clear now that Sinhalease-Tamil conflict is destroying both the Tamils and the Sinhalese.

So, the Colombo-base demonstrators should call for “Tamil Sovereignty,” as it will allow the Sinhalese to live freely without any conflict and suffering.

The Tamil and Sinhalese kingdoms were friendly, very close neighbors in the past. We can achieve that peace again as two sovereign nations.

Let us be honest with ourselves and admit that after the British left we could not live peacefully with each other. We cannot imagine living together with one person dominant over the other, and the ensuing decades have proven that trying to do so has only led to misery. However, we can be good neighbors like before the European invasion.

“Let us follow the model of Czechoslovakia in 1993; let us amicably allow each other to be sovereign states.”