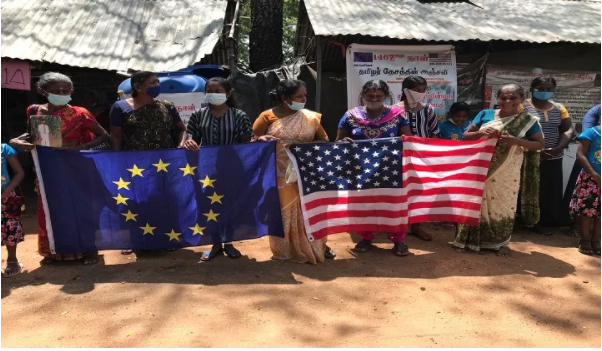 American intervention requested by the relatives of the missing persons from Vavuniya, Sri Lanka

There are three obstacles for Tamils to achieve any progress with the Sinhalese. The first is Buddhist clergy, the second Sinhala politicians, and finally the Sinhala public, which always elects racist politicians to office.”— G. Rajkumar

VAVUNIYA, NORTHERN PROVINCE, SRI LANKA, April 16, 2021 /EINPresswire.com/ — Relatives of those who have been protesting in Vavuniya for the past 1515 days have publicly called for U.S. intervention to help address the Tamils’ problems.

This was announced as part of the campaign launched by the group today, the beginning of the Tamil New Year.

“We have not been able to find a single child who has been missing since 2009.

Since independence from the British, it has been clear that no solution can be reached by negotiating with the Sri Lankan government.

There are three obstacles for Tamils to achieve any progress with the Sinhalese. The first is Buddhist clergy, the second Sinhala politicians, and finally the Sinhala public, which always elects racist politicians to office.

Since February 2017, we have been asking for U.S. involvement in our struggle in Sri Lanka. This was rejected by most Tamil politicians and Tamil intellectuals.

Now, all Tamil politicians and intellectuals agree that U.S. intervention in the UNHRC is crucial.

We therefore urge all Tamil politicians to publicly ask for American help in helping Tamils politically and in locating our missing loved ones.

On this day, we collectively call for U.S. assistance in rescuing Tamils from Sinhala genocide and oppression.”

“The Tamil leaders must realize that another big demonstration is needed from Pottuvil to Polikandi, with thousands of American flags, demanding U.S. intervention in Sri Lanka. Otherwise, these Tamil political leaders are not for the Tamils, but only for their own well-being and their power,” said spokesman G. Rajkumar.