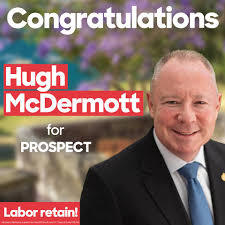 Dr HUGH McDERMOTT (Prospect) [5.40 p.m.]: Today I draw the attention of the House to Tamil Genocide Remembrance Day on 18 May. This is a day of mourning for the Tamil community both in Australia and overseas. The community held a large memorial function at Bowman Hall on Campbell Street in Blacktown on 18 May to remember the thousands of people who were killed during the civil war. Tamils the world over recognise and remember May 18 as a day for remembrance of genocide, especially in memory of the thousands of Tamils killed during May 2009.

During the last phase of the civil war, Tamil civilians were told by the government of Sri Lanka to assemble in designated “no fire zones”. Those people were then subjected to heavy artillery fire and aerial bombings. According to the United Nations panel of experts report published in 2013, civilian assembly locations, schools and hospitals were deliberately targeted for bombing under the pretext of military operations. The United Nations panel of experts stated that more than 40,000 civilians were killed during the last phase of the war alone. Others bodies, including local non-government organisations and the Catholic Church, have estimated that around 140,000 may have perished in the war.

On 18 May Tamils seek a new beginning where Tamil civilians can live in dignity with permanence, peace and freedom from oppression in Sri Lanka and Australia. The event in Blacktown was attended by hundreds of war victims who fled from Sri Lanka and sought refuge in our country. Many young Tamil Australians also took part in a walk for justice from the Tamil memorial at Rookwood Cemetery to the memorial service at Blacktown. The walk symbolised the displacement of roughly 330,000 Tamils in 2008 and 2009. They were forced to flee from bombing and shelling by the advancing Sri Lankan military.

I congratulate the organisers of this event and the many organisations around Australia that work to support the welfare of Tamils in their new home. I am proud to be a friend of the Tamil community and their representative for the electorate of Prospect. I am committed to supporting the Tamil community in Australia and in Sri Lanka, reconciliation between all of the peoples of Sri Lanka, and the teaching and protection of the Tamil language. I especially support Tamil as a language of study in the Higher School Certificate under the national curriculum and Tamil language schools within the electorate of Prospect.

I support the establishment by the United Nations Human Rights Commission of an investigation into war crimes committed against the Tamil population during the Sri Lankan conflict. I also support a humane refugee policy in Australia. Australia must meet its international obligations and treat refugees and asylum seekers with dignity and respect. I look forward to actively working with the Australian Tamil community to promote human rights, political resolution and reconciliation in Sri Lanka and among communities in Western Sydney.

I acknowledge the fine work of the New South Wales Chapter of the Australian Tamil Congress [ATC]. The ATC is the peak body for Tamil organisations in New South Wales. It provides a strong and respectable voice for Tamils in New South Wales. Its work will continue for many years to come. Furthermore, I acknowledge some of the Tamil organisations in the electorate of Prospect. I congratulate the Consortium of Tamil Associations for organising a multicultural event on Anzac Day this year and I am grateful to have been invited to speak. I also acknowledge Voice of Tamils, an organisation that provides opportunities for Tamil youth in my area, especially through sports teams and cultural events.

The Tamil people are resilient and have overcome threats to their existence. They were taken from India and sent to the island of Sri Lanka as servants and slaves by the British some 400 years ago. They fought in war alongside Australians. After Sri Lanka declared independence, their rights remained those of second-class citizens. We must acknowledge the 30 years of brutality of a largely unknown and ultimately futile civil war. In time, the wounds of war will heal; but the memories will last forever.