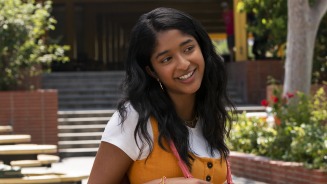 “I feel pretty normal,” says Maitreyi Ramakrishnan, the fresh-faced star of Netflix’s new series “Never Have I Ever.” “I thought it would hit me when I saw my face on the Netflix homepage. But I’m still like: OK, that’s cool. That’s nifty … I’m still me.”

Ramakrishnan is not used to being recognized — at least not yet.

This time last year, she was preparing for her role as Velma Kelly in her high school’s production of “Chicago.” Now, as the 18-year-old star of the streamer’s coming-of-age series, which hails from Mindy Kaling and Lang Fisher, the newcomer is poised to become the latest young actor vaulted by Netflix into the global spotlight, following the bona fide celebrities to come out of the “Stranger Things” and “13 Reasons Why” casts.

Ramakrishnan beat out 15,000 hopefuls in an open casting call to play Devi Vishwakumar, a first-generation Indian American teenager coping with her father’s death and struggling with her identity in the midst of her teenage mission to be popular, lose her virginity and get into Princeton University. The half-hour comedy is loosely based on Kaling’s own upbringing as an Indian American teen with immigrant parents.

“Devi, in my mind, is honestly like any teenager — guy or girl, Indian or not,” says Ramakrishnan (her first name is pronounced My-tray-ee). “She’s going through really real struggles and also being very cringe-y at times, but very honest and blunt. What I love about her is that she always has a plan. From the first episode, she has a plan of what she wants to do and what she wants to achieve. And I feel like that’s all of us. We all want to have a plan of what would make us happy.”

Ramakrishnan is sitting in her family’s dining room — “which is not really a dining room because nobody eats here” — and using her mom’s laptop for a virtual interview while sheltering at home in Mississauga, Ontario. She exudes a laid-back energy and down-to-earth confidence while sporting a royal blue blouse, hoop earrings and an impressive sweep of quarantine eyeliner across her eyelids: “This was a hustle, I have to be honest.” She says “nifty” quite a bit for a teenager in 2020 and flatly states, “Bro, download it,” while talking about the addictive appeal of the social simulation video game “Animal Crossing: New Horizons.” Oh, and she’s been watching a lot of “Community” lately.

“Devi, in my mind, is honestly like any teenager — guy or girl, Indian or not.”

“I’m a firm believer that sometimes you just have to be a potato,” she says. “I’m a potato enthusiast. You don’t need to be productive. I did, though, recently paint my drawers … I decided to paint it and jazz it up by making it look like Van Gogh’s ‘Starry Night.'”

She’s not bothered that she’ll miss out on the premiere fete that’s typical for new shows. Though she is considering putting a red towel on the ground and taking a picture of herself standing on it to post on Instagram on launch day.

“What’s going on is much more important,” she says. “I’d rather we stay safe now, so that, in the long run, we can continue to make more ‘Never Have I Ever.’ So I can go back onto a set and have that pure love for acting and to have that experience again.”

Although the series marks Ramakrishnan’s first professional acting role and her first time headlining a series, Kaling says the actress has handled the weight of a Hollywood production impressively.

“To go from being the lead in your school play to shooting 12 hours a day, five days a week on a Hollywood set, with rehearsals on the weekend, was a big transition for her, but Maitreyi’s work ethic was incredible,” she says. “We had several days of night shoots for the pilot, and Maitreyi is in every scene. Her cheerful and psyched attitude through that was truly amazing.”

Ramakrishnan was born and raised in Mississauga. Her parents — her father works for the Canadian government, while her mom is in marketing communications — fled to Canada from Sri Lanka during its civil war. As she tells it, she has one older brother, and her other sibling is the family’s Labradoodle, Melody.

Ramakrishnan got her start in theater in the 10th grade as part of Meadowvale Secondary’s production of “Footloose,” playing one of lead Ariel’s ditzy friends. Her debut didn’t come from deep desire to be on stage: “I didn’t take drama as a class even. Literally, it was not on my radar. The drama teacher just needed more people. … We’re a pretty small school. I did it and I loved it.

“I always knew I was going to do something in the arts,” she adds, noting a brief period when she dreamed of being a Disney animator. “In high school, as soon as I could drop my sciences, I dropped them so fast. I was like, ‘Goodbye, bio. See you later, chem. Never liked you, physics.’ What I realized is, I would spend hours and hours on rehearsals after school. By the end of high school, I knew acting was the way.”

“We went to the library community center because it’s the only place we knew that had blank walls,” Ramakrishnan says. “I definitely did not think anything would happen from it because I really only saw it as time I got to hang out with my best friend. I mean, this is a worldwide casting call. This is Mindy Kaling, who has a bajillion followers. There’s people with real credentials and real experience.”

By contrast, she was someone who had to type in “acting résumé templates” online and sent in “head shots” taken by a friend and featuring a brick wall exterior from school: “I was really struggling to keep my eyes open in the sunlight,” she recalls.

It worked just the same. Producers wanted her to come to L.A. for a screen test and a chemistry test — about a week before her first “Chicago” performance.

But first she had to tell her parents.

“I had to say to my mom: There’s a guy who wants me to come to L.A. cause I sent him videos of myself’ — how wrong does that sound to you? OK, I’ll let that sit for a bit,” Ramakrishnan recalls. “My parents thought it was fake, right? They had so many questions and fair enough. I did not think it sounded shady, but looking back, yes.”

“When the call came for Maitreyi to fly to Los Angeles, that is when the mama bear started to awaken,” is how her mom, Kiruthiha Kulendiren, recalls it. “It definitely sounded too good to be true. Through the whole process of multiple auditions and submissions, my faith was in that Mindy Kaling would not be associated with something sketchy.”

“To go from being the lead in your school play to shooting 12 hours a day, five days a week on a Hollywood set, with rehearsals on the weekend, was a big transition for her, but Maitreyi’s work ethic was incredible.”

Once they reviewed the evidence, her parents were on board.

A few months later — after prom, after graduation, after deferring her acceptance to York — Ramakrishnan moved into a family friend’s home in Beverly Hills to begin shooting the series. As a die-hard fan of “The Office,” Ramakrishnan couldn’t suppress the impulse to allude to it.

“I tend to make ‘Office’ references just in my regular speech,” she says. “And I noticed [Mindy] sometimes notices that I just say things from the show. For example, you know when people say the phrase ‘the tables have turned’? I always use ‘The Office’ reference of Michael Scott saying, ‘Oh, how the turntables.’ Other people think I’m messing it up. But I would notice that Mindy got it and was like, ‘This kid is a dork.'”

Like Kaling has experienced with her own fame, Ramakrishnan is aware of the significance of her presence onscreen — and the pressure it carries.

“I read all the comments on my TikToks; whenever I get a DM of somebody saying, ‘Hey thank you so much. I’m already your fan,’ I’m like, ‘These guys don’t even know if I’m good. They don’t even know my acting abilities,’ but they already feel so seen, and to me, that’s priceless,” she says. “I would take all the pressures in the world to just let somebody be seen.”