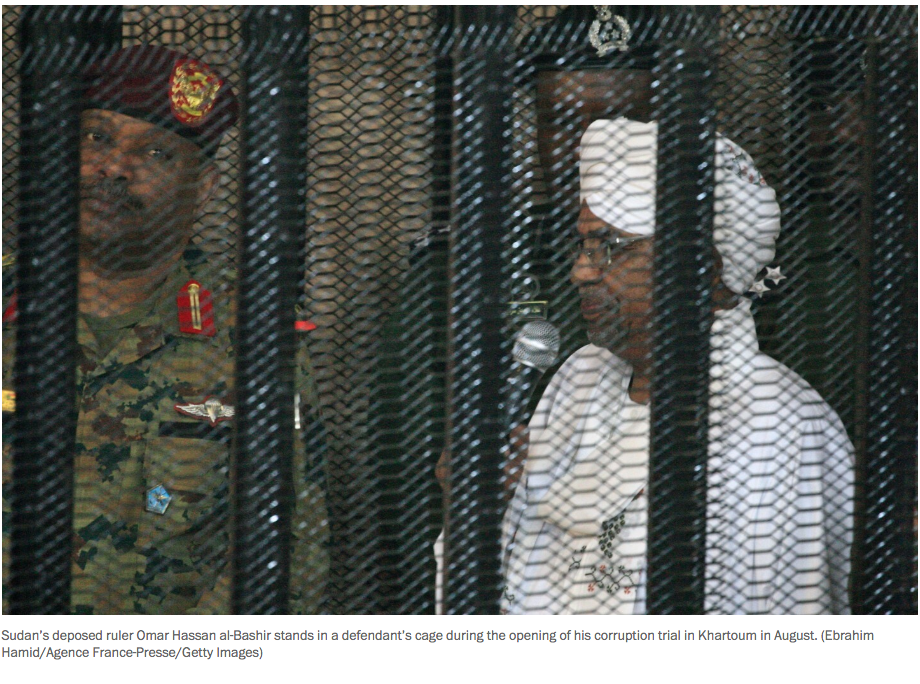 ADDIS ABABA, Ethiopia — A high-ranking Sudanese government official signaled on Tuesday that the country would refer citizens who are accused of war crimes to the International Criminal Court — a group that would include Omar Hassan al-Bashir, a former leader of the country.

Bashir, who is accused of crimes against humanity in Sudan’s Darfur region, was deposed by the military in April after 30 years in power. But the official, Mohammed Hassan al-Taishi, did not mention Bashir by name in his statement, which came during peace talks with rebel groups that Bashir once fought against in a prolonged and bloody war.

Sudan’s information minister echoed Taishi’s statement that the government would allow numerous Bashir-era officials wanted by the ICC to be prosecuted by the court, according to Reuters.

Fadi El Abdallah, a spokesman for the ICC, said the court could not confirm Sudan’s announcement. Sudan is not a party to the Rome Statute, the treaty that established the ICC.

Bashir spent years flouting an arrest warrant from the ICC and is jailed in Sudan’s capital, Khartoum. Until now, leaders of Sudan’s transitional government had said Bashir would not be referred to the ICC. Sudan’s top military and civilian leaders had not yet released public statements confirming the announcement from the peace talks, which were taking place in Juba, the South Sudanese capital.

Bashir was charged with crimes against humanity for murder, forcible transfer, extermination, torture and rape; two separate counts of war crimes for attacks against civilians; and another three of genocide.

“This decision represents a total about-face for Sudan and is a measure of how far Sudan has come in such a short time. Sudan has gone from leading the international coalition against the ICC to delivering it the most important case it has ever had,” said Cameron Hudson, a senior fellow at the Atlantic Council who focuses on Sudan. “The decision also demonstrates the fundamental shifts occurring within the country.”

Bashir’s alleged crimes took place in Sudan’s Darfur region after rebel groups there mounted an insurrection, sparking years of crackdowns in which hundreds of thousands of civilians were massacred and millions more displaced.

“The fledgling post-Bashir Sudan government is demonstrating a serious commitment to human rights principles in its first months in office. Finally seeing a small measure of justice done for the mass atrocity crimes in Darfur will hopefully breathe new life into global efforts in support of human rights and genocide prevention,” said John Prendergast, co-founder of the Sentry, a monitoring group that has documented crimes allegedly committed by Bashir’s former regime.

Darfur remains restive, and dozens have been killed in ethnically tinged conflict since the beginning of this year.