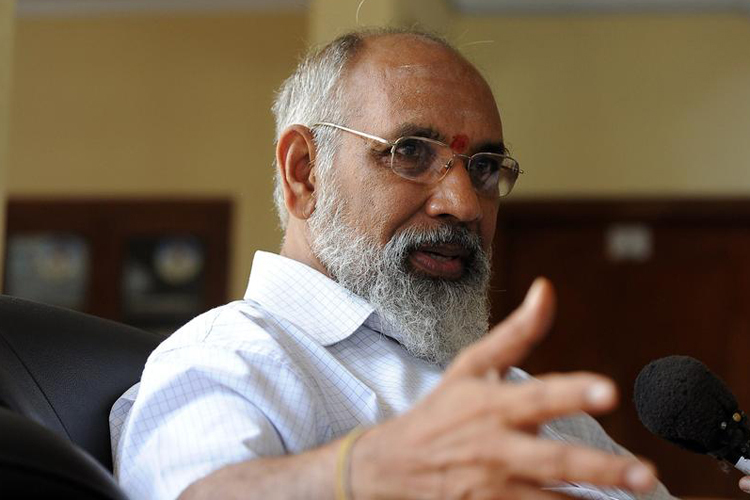 Successive Sinhalese Govts Attempted to change demography – Chief Minister Wigneswaran
BY FARAZ SHAUKETALY ON 07/12/2017
Chief Minister of the Northern Province, Justice C.V. Wigneswaran says, Rear Admiral Sarath Weerasekara’s recent interview with Ceylon Today titled ‘Wigneswaran should resign’, needs to be replied. In his email response, to Admiral Weerasekera’s answers to Ceylon Today The Interview of 23 November 2017, the Chief Minister has expressed his opinion, by taking each point he contradicts and has formulated his responses.

CM: Federalism will retain the togetherness of the Country while the disparate groups whether in the North and East or each of the other seven Provinces would be able to govern themselves according to their individual culture, customs and aspirations.

It appears he is interested in a unitary structure to retain the undue advantage the Sinhalese usurped unto themselves at the time of Independence. They promised to look after the interests of the minorities allowing section 29 into the Constitution. But the very next year, in 1949, they deprived the Up – Country Tamils of their franchise. They brought ‘Sinhala only’ took over schools, brought standardization and colonized traditional Tamil areas all to the detriment of the minorities. This gentleman seems to be interested in keeping the undue advantage gained at the time of independence unto the Sinhalese forever. Surly it is time to become sane and reasonable!

Sarath has said Sri Lanka is a unitary country and for thousands of years the Sinhalese have made supreme sacrifice to keep it unitary.

CM: That’s rubbish! Where did he learn his history? Until 1833 the country was divided. The Tamil speaking people had a kingdom of their own, the East was governed by Tamil petty chiefs and the North and East formed a composite Tamil speaking area. There were three or four separate kingdoms in the Island. This country was never unitary unless a king brought the whole country under his suzerainty during his lifetime. Ellalan the Tamil King brought the entire country under his overlordship and ruled for 44 years. But such overlordship was not regular. Hence the country cannot be referred to have been unitary throughout by any stretch of imagination.

He says if federalism is granted the country would be divided.

CM: The country is divided even now. This is not a Sinhala Buddhist country. There are Sri Lankan Tamils, both Christian and Hindu, Muslims, Upcountry Tamils both Christian and Hindu, Sinhalese both Christian and Buddhist, Veddahs and others living in many areas. There is an artificial togetherness brought about by the Unitary Constitution. The Unitary Constitution has conferred overall control over the country unto the hands of the Sinhalese. That is where the problem is. The Sinhalese have misused the trust reposed on them by the British and have been discriminating against the Tamils right from the beginning. When Sir John Kotelawala said parity of status to both Sinhala and Tamils, S.W.R.D. Bandaranaike said “Sinhala only in 24 hours” and won the election in 1956 by pandering to the baser instincts of the majority community. I say baser instincts because in 1958 we had the butchering of the Tamils by the Sinhalese. Since then the majority community has called the shots to the detriment of the Tamils.

Programs and riots were the result of Sinhala hegemony and intolerance towards other communities. Federalism is to install the equality and dignity of the people including the Tamil speaking people. Just because one community is more in numbers they do not in any way become bigger or better than members of other communities. All have equal rights. Thus the individuality of the Tamil speaking people need to be maintained. Presently there is a tendency to call the country Sinhala Buddhist and give wrong information regarding the Tamils. There is also a tendency to colonize the traditional Tamil areas with Sinhala colonists.

Federalism is the ideal arrangement to maintain our individuality and dignity while working with the other communities for the betterment of a united Sri Lanka. Hence we have asked for an Eksath Lanka rather than Ekiya Lanka.

Sarath has referred to my life personally and said you have the audacity to announce that the country should be federated and that Sinhalese and the Muslims have no right to live in Jaffna. That I had advised the Tamil youth not to marry Sinhalese.

CM: I pity this gentleman whoever he is! I am proud of my background. I have lived in many parts of this country. I have some knowledge of all religions in this country. I used to go to Vajiraramaya whenever Ven. Narada Thera used to give talks on Buddhism. I know to some extent the three main languages spoken in the country. I have moved closely with Sinhalese, Tamils, Muslims, Burghers, Malays and so on. I consider myself a Tamil Sri Lankan not a Sri Lankan. But I never said Sinhalese and Muslims have no right to live in Jaffna. That’s preposterous. I have opposed State sponsored colonization and still do. That is done by the State to bring about demographic changes in predominantly Tamil speaking areas to set up Sinhala hegemony. Therefore, I have opposed such modus operandi of successive Governments.

How could I ask the Tamil youth not to marry Sinhalese when my own children themselves have married into Sinhala families?

He also had said that I must know the true history of Sri Lanka and maintain that Sri Lanka has been historically one country.

CM: Surely the history of the Tamils of Sri Lanka is quite well known now ! The Tamil Dravidians were the original inhabitants of this country. No doubt there had been Tamils coming into the country at various times in history. But they are all to be considered as Dravidian Tamils joining up with the original inhabitants who were Dravidian Tamils themselves. Students join a school at various classes. But they are all considered as old boys of the same school. All inhabitants of the North and East are Dravidian Tamils. If the country was one country, at any time, before the birth of the Sinhalese language, it was during the 44 years’ reign of the Tamil King Ellalan. Otherwise the country throughout had independent states. It was never a united single country unless a king captured or annexed other kingdoms. Their reign lasted until that king lived only.

Uniting of the different disparate parts took place in 1833 when the British wanted to bring in administrative unity. But even then the Northern and Eastern Provinces have been majority Tamil speaking areas until now, despite every effort on the part of successive Sinhalese Governments to change the demography adversely against the Tamil speaking. They are continuing to change the demography even now with the help of the Armed Forces.

The Sinhala Colonists living around Trinco came there as recently as during Madame Srimavo’s time in the 1970s. I have gone and met them in the 1970s. They complained then to me that the Government wants them to take over Tamil areas but the Government had not given adequate amenities and protection. They thought I was a Sinhalese and confided in me! It was open colonization to capture traditionally Tamil speaking areas for the Sinhalese.

The Admiral also points out ‘what about the 58 percent‘ of Tamils living in the South among the Sinhalese?

CM: What about them? They would be living in one country. So they could decide whether they should live in the North or South.

That is a wrong perception of federalism. This type of misunderstanding is what has made federalism a dirty word among the Sinhalese.

Every learned Sinhalese unless he is a politician talking with his tongue in his cheek welcomes federalism as an appropriate Constitutional arrangement to allow all communities to live in equality, dignity and peace.

He says you have returned money given by the Government to the North for development. He quotes Hon. Douglas Devananda.

CM: Again he is wrong. We have not returned a cent up to date. Only this week the Northern Province CM’s Ministry was adjudged number one among 831 Ministries, Departments both Central and Provincial, plus local authorities and received the Gold Medal for proper financial management. In fact we have done development work this year but the money promised to us by the Central Government has still not been paid to us. Contractors have stopped work. Over 1000 million is still due. If this gentleman wants to know about us let him ask us directly. We will reply him. Why is he asking a politician rejected by our people? Though Douglas Devananda is also an MP now, thanks to the proportional representation system he is there. Otherwise he would have been ex-MP as he is ex-Minister now.

He disputes that Devanampiya Theesan was a Tamil.

Later books after the birth of Sinhala language might have referred to our land in anyway their fancies directed them.

Original name of this country was “Sinhale” says Admiral Weerasekara.

CM: Again it is rubbish! Eelam was the original name. Hela is the Pali form of Eelam. Sinhale is a later concoction. If need be let us arrange for independent, impartial international historians to have a debate with the pseudo historians among the Sinhalese to find out the truth. It will not take an hour to demolish the fancy apology put forward as history by such pseudo Sinhala historians.

One has to produce the pre Buddhistic Dravidian finds in this Island to demolish such fancy ideas.

He had said that I do not want to allow Sinhalese in the North?

CM: Again wrong. I am against State colonization of the North and East. There are Sinhalese in Vavuniya living there for over 75 years or so. Surely they are part and parcel of the North! For the sake of two such members from Vavuniya we give all respect to their language and translate all NPC documents into Sinhalese and provide them with translations though at much inconvenience, since translators are hard to come by. We treat our Sinhalese brethren with love and respect. Mr. Weerasekara must be carrying his military insufficiencies in his heart!

He refers to those who are alleged to have committed War crimes as War heroes.

CM: That is the tragedy of our leaders today! Criminals are identified as heroes.