The Modi government must stop appeasing the Rajapaksas and demonstrate to the international community that India is an assertive regional power. 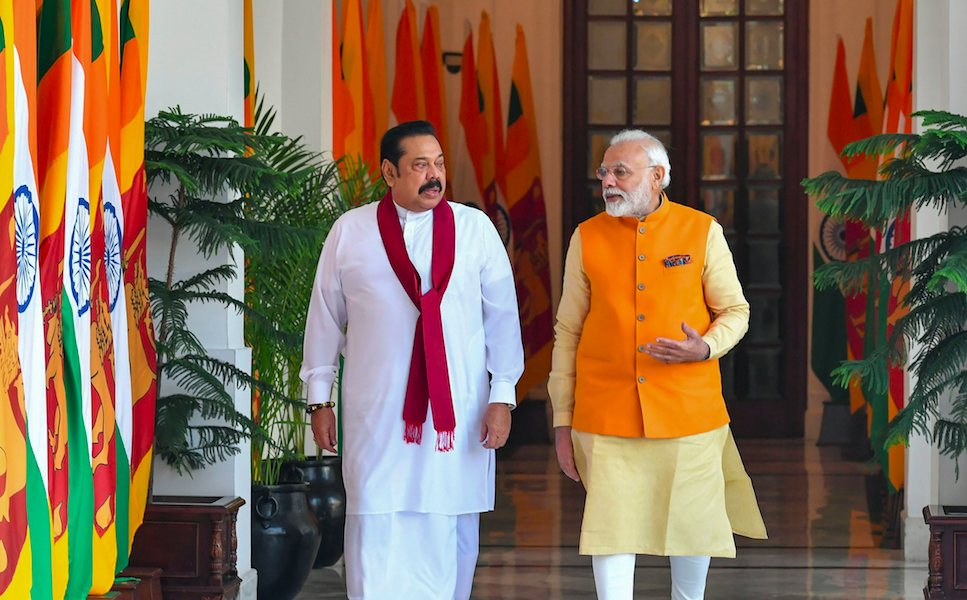 All is not well in the Indian Ocean. In recent months there have been escalating tensions between India and Sri Lanka, with New Delhi on the receiving end of a series of diplomatic blows from its smaller neighbour. Despite Indian efforts at appeasing the island state’s government, the straggling relationship across the Palk Strait has suffered new setbacks.

The most recent controversy erupted this month after a Sri Lankan minister claimed that Colombo was scrapping a 2003 agreement which saw oil tanks in the eastern city of Trincomalee leased to the Indian Oil Corporation. Udaya Gammanpila, a Sinhala nationalist stalwart, declared his government was “proud to re-acquire” the tanks and that his government would hold internal discussions with the Buddhist clergy and trade unions over their future. Within hours, however, India was forced to deny the claim and insist the original pact still stood. The fate of the deal remains unclear.

Gammanpila’s commotion arrived just days after Sri Lanka announced it was awarding a $12 million contract to construct a renewable energy system in three Jaffna islands – lying less than 50km off the Indian coast – to China. An indignant India reportedly “lodged a strong protest”, before swiftly going on to offer a $12 million grant for the project, in an apparent desperate attempt to displace Beijing.

Both events, which left New Delhi embarrassed and smarting, came on the back of another, more consequential agreement that Sri Lankan officials also claimed to have suddenly scrapped. The Eastern Container Terminal at Colombo’s port saw almost 70% of its traffic come from India and was a key outpost for New Delhi’s export economy. After years of painstaking negotiations, a $700 million deal was settled between Sri Lanka, Japan and India to develop the port, which would still see Colombo retain a majority stake in operations. And though Sri Lanka’s president initially accepted Indian conditions, pressure from Sinhala nationalist groups provoked long-standing anti-Indian sentiment. Buddhist monks decried what they termed “an Indian invasion”, as workers launched a series of protests. “If the government wants to hand over something to India then give them the parliament,” said Shyamal Sumanaratne, a union leader. “We are not a province of India. We are a sovereign nation and we do not need to dance to their tunes.”

Also read: In Geneva, India Signals to Sri Lanka that Support in UNHRC Is Not a Given

Weeks later, Sri Lanka declared the deal was off and Indian officials were left scratching their heads. “India is at a loss to understand Sri Lanka’s action which is highly damaging,” said one Indian diplomat. “It appears to us that it is a hoax from the beginning,” the Sunday Times in Colombo quoted an anonymous Bharatiya Janata Party leader as saying. “Sri Lanka was not going to give it to us.”

This succession of blows to New Delhi should come as no surprise. Indeed, it follows a long history of Sri Lankan ‘Indo-phobia’, driven by a protectionist, Sinhala-Buddhist nationalism that has been central to the island’s politics since independence. For example, as India continues to ink new trade deals with states around the world, Sri Lanka has for decades resisted negotiating a Comprehensive Economic Partnership Agreement (CEPA), which would increase the flow of trade between the two states. Under the newly elected Rajapaksa regime, that anti-Indian sentiment has been given a new lease of life, leading to the abrogation of several initiatives in the space of a few months.

There is a chauvinistic logic to this Indian aversion. Tamil Nadu, a powerhouse state with a population of almost 70 million, is a stone’s throw from the island’s Tamil North-East, and has a millennia-long history of close cultural and linguistic links. Tighter trading ties to India could help revive the war-torn region and has repeatedly been called for by the island’s Tamils. It was only in 2019, after years of pressure, that Jaffna’s airport was allowed to operate limited flights to India.

But opening up the north-east to global connections, and particularly India, is a move that the Sinhala south has long opposed, with tens of thousands of Sri Lankan soldiers still stationed in the heavily militarised region. Efforts to connect the two land masses by land or rail have fallen flat, with fervent opposition from Sri Lankan politicians. The island is viewed, and governed, as a Sinhala Buddhist bastion. Tamils, in India or on the island, are therefore deemed a threat to that hegemonic rule. Attempts to encourage economic ties between the two regions, or grant the north-east greater autonomy will be resisted.

This is illustrated in India’s failed efforts to ensure Sri Lanka implements the 13th Amendment, a product of the 1987 Indo-Lanka Accord, that would see some devolution of powers to the Tamil regions. Though India has for decades called for its implementation, Colombo has responded with years of false promises, obfuscation and outright refusal. In recent months, that has ramped up with Sri Lanka’s foreign secretary vowing “never” to devolve land and police powers to the provinces as stipulated, whilst minister Sarath Weerasekera lashed out at Indian Prime Minister Narendra Modi’s repeated requests for the amendment to be implemented. The minister went on to criticise Modi at a televised public event, stating that “devolution means the sharing of power… We must eliminate the term from our political vocabulary”.

Despite this increased antagonism, New Delhi has been surprisingly timid in its response. There was no admonishment for the minister’s comments, nor for the repeated failure to implement power-sharing agreements or the reneging on trade deals. Instead, the Modi government has countered with attempts at appeasing the Rajapaksa regime, racing to offer coronavirus vaccines, continuing military exercises and even gifting radar equipment to the Sri Lankan air force last month. All this in the context of overwhelming support for Sri Lanka’s military offensive that slaughtered thousands of Tamil civilians almost 12 years ago. Colombo, however, continues to rebuff India. New Delhi’s efforts have clearly not borne fruit.

In Tamil Nadu on the other hand, outrage over Sri Lanka’s actions has been growing. Within hours of authorities destroying a monument built to commemorate massacred Tamils last month, the Tamil Nadu chief minister and politicians from across the political spectrum condemned the move , calling for its reconstruction. After Sri Lankan security forces reportedly tortured and killed four Tamil Nadu-based fishermen just weeks ago, including a Tamil refugee who fled the island, protests spread, and lawmakers expressed their fury. And as assembly elections loom in the state, rhetoric over supporting Eelam Tamils, as Sri Lanka’s Tamils are known, has risen.

These are sentiments that Modi will be acutely aware of, having raised them himself during a trip to Tamil Nadu’s capital earlier this month. In an address where he lauded the southern state, he took care to mention the plight of Indian fishermen arrested by Sri Lankan security forces and reaffirmed his commitment to “the welfare and aspirations of our Tamil brothers and sisters in Sri Lanka”. “We are always committed to ensuring that they live with equality, justice, peace and dignity,” he said.

Modi’s words, however, ring hollow, given the lack of reprimanding action from his government. New Delhi’s policy of appeasing the Rajapaksas whilst offering the Tamils on either side of the Palk Strait empty platitudes, continues to come up short. Tamil rights on the island continue to be violated, Tamil Nadu fishermen continue to be attacked and an emboldened Sri Lankan government continues to rebuff India.

The weeks ahead may provide the Modi government opportunities to fix that. As Sri Lanka’s financial woes continue, India can exert economic pressure on Colombo, particularly as the Rajapaksas seek out a currency swap deal.

And as the UN Human Rights Council meets this month, accountability for mass atrocities committed by Sri Lankan forces is being discussed once more. Modi’s words of commitment towards equality and justice for Tamils were echoed by India’s representative in Geneva, who claimed it was one of its pillars of policy on Sri Lanka. But if India is to do more than simply pay lip service to those aspirations, it must heed the voices of the people it says it is committed to.

With a new UN resolution being considered, India must abandon its policy of colluding with the Sri Lankan state and chose to lead, not stall, international action. Not only will it prove to Tamils domestically and in Sri Lanka, that New Delhi is determined to stand by its words, but it will also demonstrate to the international community and Colombo, that India is an assertive regional power. Indeed, with the UN High Commissioner for Human Rights warning that the “seeds of violence” are being sown in Sri Lanka, it is precisely that type of decisive action that the region sorely needs.

Dr Thusiyan Nandakumar is a London-based editor at the Tamil Guardian, a newspaper that has been covering Tamil and Sri Lankan affairs for over 20 years.