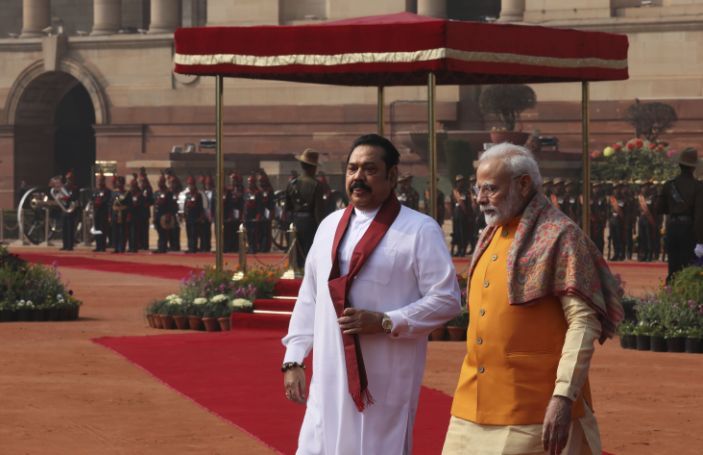 NEW DELHI (AP) — Indian Prime Minister Narendra Modi asked his counterpart from neighboring Sri Lanka on Saturday to resume a post-civil war reconciliation process with minority ethnic Tamils that appears to have stalled since a new president was elected last year in the island nation.

“We had an open conversation about reconciliation in Sri Lanka. I’m confident that the government of Sri Lanka will meet the Tamil people’s expectation of equality, justice, peace and dignity in a united Sri Lanka,” Modi told reporters after meeting with Sri Lankan Prime Minister Mahinda Rajapaksa.

Rajapaksa, who earlier was Sri Lanka’s president, led security forces to crush a Tamil rebel group, the Tamil Tigers, in 2009, ending a 26-year civil war. As president, he had promised India, whose 80 million Tamils share linguistic and family ties with Sri Lankan Tamils, that his government would give Tamils a level of autonomy as stipulated in a peace agreement between the two countries. But critics say those promises were not fulfilled.

Rajapaksa lost a presidential election in 2015, and his successor, Maithripala Sirisena, initiated a process to share power and find missing people from the war, and promised to investigate allegations of war crimes leveled against both government forces and the Tamil Tigers.

Rajapaksa’s younger brother, Gotabhaya Rajapaksa, was elected president last year and has ruled out greater power sharing for Tamils, and the promises made by the Sirisena government have not been continued.

India considers the Indian Ocean region to be its strategic backyard and is anxious about China’s growing influence.

China expanded its footprint in Sri Lanka during Rajapaksa’s 2005-2015 presidency.

Sri Lanka leased a Chinese-built port located near busy shipping routes to a Chinese company in 2017 for 99 years to recover from the heavy burden of repaying a Chinese loan the country received to build it.

The facility is part of Beijing’s plan for a line of ports stretching from Chinese waters to the Persian Gulf. In March, China agreed to provide a $989 million loan to Sri Lanka to build an expressway that will connect its tea-growing central region to the Chinese-run seaport on the southern coast.