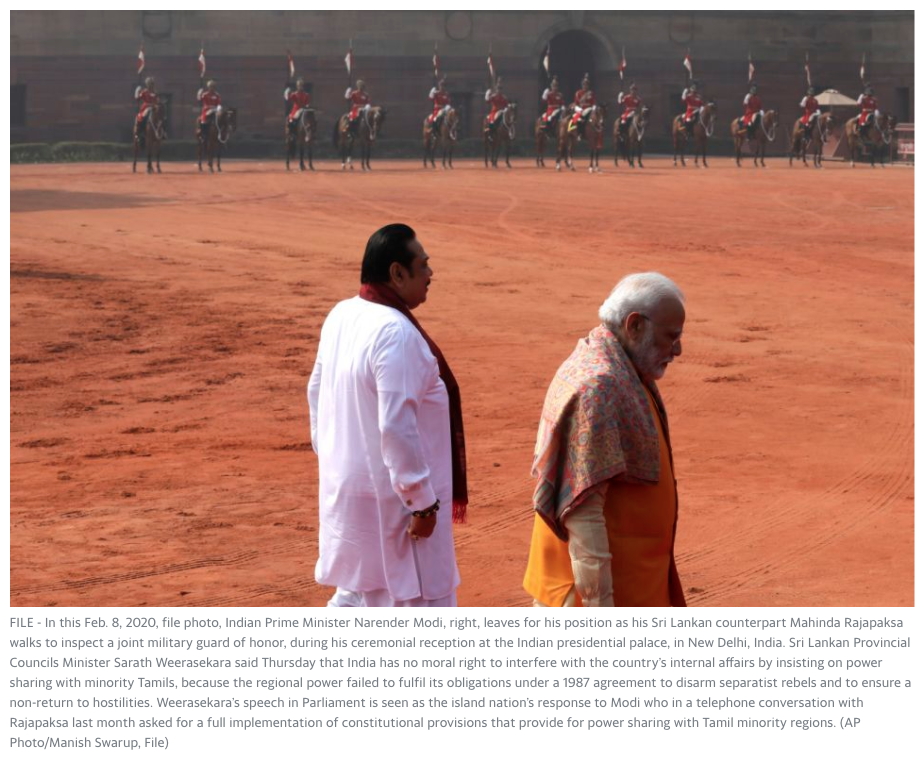 KRISHAN FRANCIS
Thu, October 8, 2020, 9:44 AM EDT
COLOMBO, Sri Lanka (AP) — A Sri Lankan minister said Thursday that India has no moral right to interfere in the country’s internal affairs by insisting on power sharing with minority Tamils because New Delhi failed to fulfil its obligations under a 1987 agreement to disarm separatist rebels and ensure an end to Sri Lanka’s civil war.

In a phone conversation on Sept. 27, Modi asked Rajapaksa to “to address the aspirations of the Tamil people for equality, justice, peace and respect within a united Sri Lanka … with the implementation of the 13th Amendment to the Constitution of Sri Lanka,” according to a statement from Sri Lanka’s foreign ministry.

The Indo-Sri Lanka Accord called for the devolution of power to the provinces and resulted in the 13th Amendment to the Sri Lankan Constitution, which created provincial councils with a degree of decentralized power. Weerasekara is the minister in charge of the councils.

Weerasekara said Rajapaksa chose last year not to criticize India’s revocation of statehood for its disputed Jammu and Kashmir region because it was an internal matter, while Modi may have called for power sharing with Tamils because India was party to the earlier agreement with Sri Lanka.

“I have my reservations about the Indo-Lanka accord … did India honor her part in that agreement?” Weerasekara asked, adding that India had failed to ensure disarmament, an end to hostilities and the resettlement of displaced people.

“So there is serious concern about the validity of the agreement, and if it’s not valid I think India has no moral right to interfere in our affairs,” Weerasekara said.

India in 1987 intervened to end the civil war between Sri Lankan government forces and minority ethnic Tamil rebels. Sri Lankan Tamils have family, linguistic and cultural ties with Tamils in South India, and India was eager that the conflict in its neighboring country did not create unrest within its own territory.

India sent a peacekeeping force to implement the agreement but ended up fighting with the rebels before returning home with heavy losses. In 1991, a suspected Tamil Tiger suicide bomber killed former Prime Minister Rajiv Gandhi, who had signed the agreement.

Sri Lankan government forces crushed the rebels in 2009, ending a 26-year civil war that killed at least 100,000 people, according to the U.N.

Successive Sri Lankan governments have pledged to India and the U.S. that they will share more power with the Tamils to ensure peace, but President Gotabaya Rajapaksa, who was elected last November, has rejected the idea.