Full article can be found from below URL link courtesy of Colombo Telegraph.

39 Years After Black July, It Is Time For Tamil Eelam: Preparing For A Unilateral Declaration Of Independence

By Lorenzo Fiorito and Sowjeya Joseph –

As Sri Lanka’s economy collapses completely, the people of that country to the south of Tamil Eelam have asked their leaders to step aside. Gotabaya Rajapaksa, the one-time butcher of Mullivaikkal, now has been running frantically from place to place in a military airplane. He’s seeking asylum abroad (as we all tend to do when angry mobs try to kill us – though not all of us have done quite so much to personally invite mob justice). 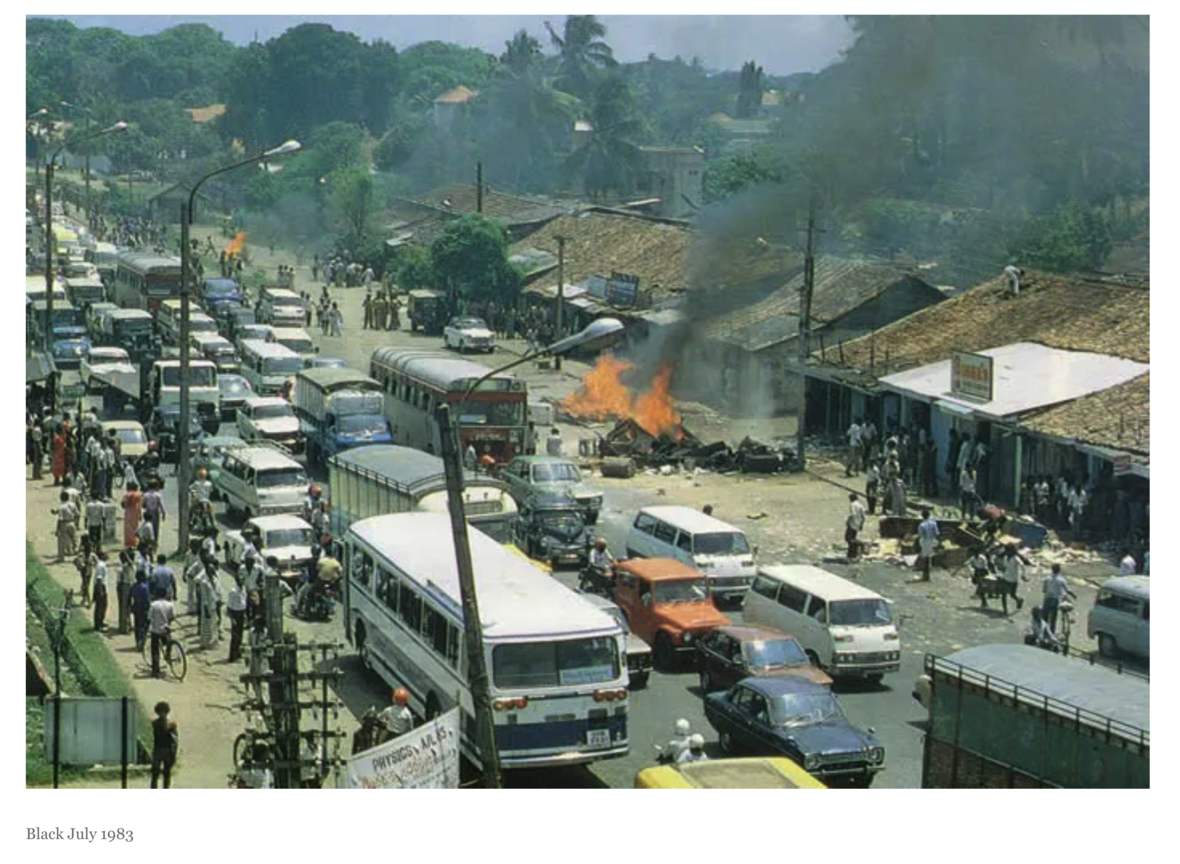 Ranil Wickremesinghe, who has just been elected president, was originally appointed as “acting president” by Gotabaya Rajapaksa. This confirms his status as an extension of the Rajapaksa clan’s rule. The fact remains that the country has no one genuinely in charge, enjoying the people’s confidence. Indeed, the Southern protestors’ demand “Gota Go Home” has simply become “Ranil Go Home.” Sri Lanka is not likely to become more stable anytime soon.

Yes, it’s time for Tamil Eelam. But where are our leaders? Not a single Tamil “leader,” whether in the homeland or diaspora, has expressed willingness “to take the lead,” and declare the independence of our state.

The Tamil people have made it clear, time and time again since the Vaddukoddai Resolution, exactly what they want their leaders to do. But only one leader, Velupillai Pirabakaran, has ever really tried.

Ads by FatChilli
Some want, yet again, to reform the Sri Lankan state. It’s almost as if the Tamil genocide had never happened, or as if that ongoing genocide were not an essential part of how the state works. Tamils have no interest in remaining within a state that requires their ongoing genocide to function. All attempts at constitutional reform are meant to revive the failed Sri Lankan state, and to keep Tamils within it.

Some, who fall under this category, have gotten so caught up in this momentous drama that they’ve forgotten history. Any member of the Tamil diaspora, who’s involved in Tamil politics, should be prepared to return to the island, and to live under the political system that they help to create. Anyone who tries to create political prescriptions for others should be prepared to accept the consequences of those prescriptions for themselves. (The diasporic Tamils writing this article, personally, stand for Tamil Eelam—and not for Sri Lanka, whether reformed or otherwise).

Almost as bad as these would-be reformers of Sri Lanka, others believe that the international community must first give Eelam Tamils permission to exercise our independent statehood. But “one should be pragmatic enough to understand that no ruler anywhere can concede anything that is not in his power to give. New nation states are never given, they are always taken.” A sovereign people does not ask for permission to be free: it grants permission to its chosen representatives, to use strategies and take actions that exercise its own inherent freedom.

While our post-2009 political structures have held the Eelam Tamil nation together (to be sure, in loosely connected fragments) for 13 agonizing years, the nation is entering a new phase.

Sri Lanka is no longer our all-powerful oppressor; it’s just another failed and powerless state. It cannot afford the troops, in the numbers that it would need, to occupy the entire island militarily.

The international law is clear. Tamil Eelam is a legal fact, simply waiting for acknowledgement.

The arguments range from state continuity, between precolonial times and the present; to improper decolonization, without gaining Tamils’ expression of their free and genuine will; to original title, ancient title, and historic title over territory and maritime zones; to Tamils’ exercise of the right of self-determination.

According to Paragraph 122 of the ICJ’s Advisory Opinion on Kosovo: in and of themselves, unilateral declarations of independence do not violate any rule of international law.

Tamil Eelam needs a leadership that understands this new reality and can take advantage of it.

Currently, a power triangle of Russia, China and India is forming (although the latter likes to appear friendly to both power blocs, the West and the East). Trade and finance between these three states have significantly increased after Russia´s invasion of Ukraine.

With the emergence of a different global order, the Tamil nation must make sure to be friendly with everyone and not to blindly rely on the West, particularly the USA. As Henry Kissinger once said: “To be an enemy of America is dangerous, but to be a friend is fatal.” From recent history, both the Kurds and the Afghans can provide lessons to Tamils.

This global power rebalancing will also influence the outcome of Sri Lanka´s financial crisis. It has yet to receive a substantial bail-out package either from the IMF or from other states (e.g. India, China). Sri Lanka is in turmoil because of its institutionalised racism towards the Tamil nation and other peoples living on the Island. This crisis is not just a consequence of tax policy, the COVID pandemic, and the war in Ukraine, but is a direct result of military spending on the very expensive war against the Tamil people. Other factors just accelerated the process.

By now, foreign investors will understand that even liberal regime changes (such as the one that took place in 2015) can lead to massive investment losses. Ranil Wickremesinghe (who told the World Economic Forum, as PM in 2017, that he would make Sri Lanka rich by 2025), seized the chaos and turbulence of the present moment to fulfil his lifelong dream of becoming President of Sri Lanka.

At the end of the day, Sri Lankan politicians do not feel accountable to their own people, nor for their promises to investors. Foreign investors would be well advised to align their goals with those of the Tamil nation if they are ever to receive any return on their investments.

From the perspective of the Tamil nation, Sri Lanka´s debt cannot be restructured without placing conditions on any restructuring deal: to resolve the dispute between Sri Lanka and Tamil Eelam. A two-state solution is the only fair and just outcome. It will provide stability and prosperity for the two nations, as well as investment return and security for foreign investors. Otherwise, foreign investors lose out, and future foreign investments into Sri Lanka will decrease.

Mandate of the Sovereign Tamil People: A Constitutional Assembly For Tamil Eelam, and not for Sri Lanka

Who, with both the will and the ability, will seek the mandate to lead Tamil Eelam? It is a simple matter of courage plus strategy.

Diasporic Tamils should join diaspora organizations in large numbers—if those organizations have democratic internal structures. They should support the best people inside those structures, or should put forward candidates who will listen to the sovereign people’s will.

There are certainly enough people in the homeland who will wish to seize the moment, and they will have their own tactics.

New leaders will have to be found from among the youth, as well as from within the political “background,” where the most useful and effective Tamil national organizers tend to operate.

The Government of Tamil Eelam would conduct a binding referendum of the sovereign people on the question of independence. (For, unlike the one distributed so widely throughout the diaspora in 2009-10, this referendum would be worded in such a way as to be legally binding.) The Government would invite UN observers to monitor the referendum.

Then, armed with the people’s mandate and international legality, the work of building a nation can begin: yet again.